This author has not written his bio yet.
But we are proud to say that Matt VanNoord contributed 25 entries already.

Now that fall has arrived and your lawn growth has slowed, it’s time to turn your attention to winterizing your property. Here is a checklist of things that need to be done before winter arrives: -Prepare for your last leaf cleanups:-Clean any remaining leaves from the roof-Clean the leaves out of your gutters-Get all the […]

Many people often mistake voles for moles. Moles make underground tunnels while voles make above-ground runaways. Moles eat earthworms, grubs, and insects whereas voles gnaw at the base of trees and shrubs and eat plants, especially grass and flower bulbs. During the winter, voles will tunnel under the snow and create winding trails about 2 […]

The days of raking and bagging leaves should be over for almost everyone. Studies have shown that homeowners have successfully mulched more than 6 inches of leaves back into their lawn. Mulching leaves will chop them into very small pieces; often into dust. From a distance or after substantial rain, you’ll never know your leaves […]

#4- Seeding too heavy- Most people put down grass seed way too heavy.   More is better, right?  Not with seeding.  When seeding too heavily, you get lots of small grass plants too close together without enough space for their roots to grow.  As a result, most of the plants die, and you are left with […]

There is one free and easy change that you can make to improve the health of your lawn.  Are you ready to do it? For a great lawn, you must mow your grass at the proper height. For the summer months, your grass should be mowed at 3.5 inches.  Grass that is mowed below 3 inches […]

Spring is a great time for some lawn mower maintenance. Follow these 5 steps and you will be ready to mow! Change the oil. This is one of the most important steps. Also, check the oil periodically during the season to make sure it’s at the correct level. Check the air filter. The air filter […]

Each spring, we receive questions regarding an ugly, wide-bladed grass growing in lawns. Customers are mistakenly identifying this grass as crabgrass. It is a easy mistake to make because they look so similar, but this ugly grass is actually quackgrass, not crabgrass. Quackgrass is a perennial grass that is one of the first grasses to […]

Mole or Vole Damage? Over the winter months, moles and voles continue to work in your lawn.  These two pests damage a lawn in different ways and identifying them is key in controlling them. Click here for more information on identifying Voles vs Moles

What are the gray or pink spots in my lawn? Snow mold. There are typically two kinds of snow mold: Gray and pink. This disease is usually noticed as the snow melts in the spring. It is commonly found in those turf areas of greatest snow accumulation, such as along driveways or over the brink […]

-This is a part of the article entitled “Mowing in the heat” by Dr. Kevin Frank. “Last year I witnessed several incidents of tire tracks on turfgrass simply from mowing during the hottest part of the day. Typically tip burn happens when mowing occurs on heat or drought stressed turf. When the turf is close […] 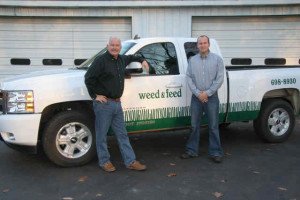